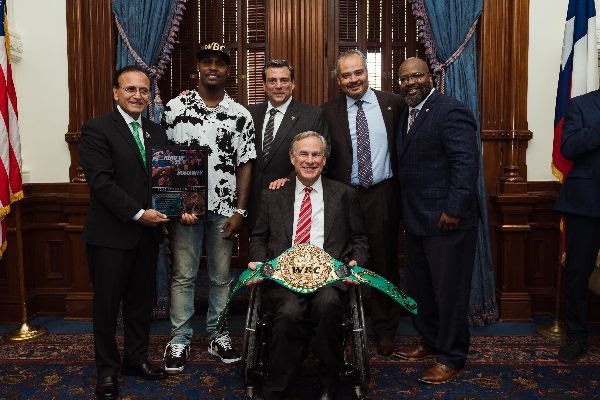 The World Boxing Council represented by it´s President, Mauricio Sulaiman from Mexico and WBC Middleweight Champion, Jermall Charlo along with the Texas Department of Licensing and Regulation represented by it´s Chairman, Rick Figueroa, met The Governor of the State of Texas, Honorable Greg Abbott this past Thursday August 5 2021 at the State Capitol in Austin Texas.

The WBC Awarded Governor Abbott the Award “ Hero for Humanity “ recognizing his exemplary dedication and performance during the Covid 19 Pandemic which has hurt the world at all levels possible and imaginable.

“It was during the darkest times when the leadership of Governor Abbott rose to take actions which paved the way to the activation of the State, the country and the world in specific scenarios like the sport of boxing, it is my great honor to present this award on behalf of all the members of The WBC representing 170 countries of the world “ said Sulaiman….

The TDLR administration worked diligently with boxing promoters and sanctioning organizations to have our sport active from fights without fans, then to limited attendance to the record breaking event at Dallas Cowboys AT&T stadium with the largest ever attendance for a sporting event in a closed stadium with 73,126 fans witnessing the Canelo Alvarez victory over Billy Joe Saunders. Strict protocols were in place to keep everyone safe and allow boxing to be staged.

The State of Texas currently has 5 WBC World Champions :

Jermall Charlo was in attendance as the representative of The WBC Champions and was proud to present Governor Abbott The WBC Freedom Belt which commemorates the now National Holiday “Juneteenth”. “ Mr. Governor, I won this belt for us, for all texans, for everyone in the world, regardless of color or creed; Thank you for your leadership to keep our people safe and for opening Texas for business,” said Jermall.

The WBC has instituted the Freedom Belt to have a yearly edition to be presented to the winner of the bout taking place during this important holiday.

It was a very emotional ceremony as former Governor, Rick Perry, was visiting the office for the first time in six years and was a witness of honor for this memorable occasion.

TDLR team members who were also in attendance were praised by Rick Figueroa for their dedication and passion to Combat Sports. Brian Francis, “ Big” Greg Alvarez, Mike Arizmendez, Steve Bruno, Tela Mange and Lee Parham were personally greeted by Governor Abbott, so was Ray Mancera who is The WBC Government affairs director in the USA.